It is impossible not to think about roads when traveling in Sarawak’s interior. In 2012 I wrote an article about Sarawak’s rural roads for Inside Story, the excellent journal published by the Institute for Social Research at Swinburne University, when I was working on my PhD. 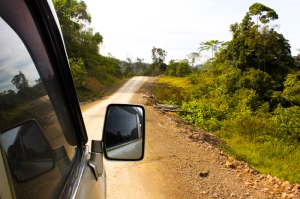 Writing the article was a great opportunity for me to publish some material I collected during my research which did not relate to my primary objective. In the area where I worked there were no paved roads, only logging roads maintained by logging companies. People living in the villages also used these roads, which were their only connection to the coastal cities apart from river travel, which was much slower. 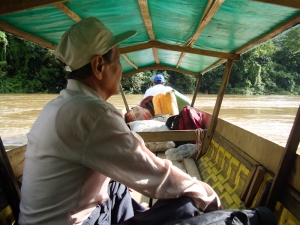 When the logging companies withdrew, roads soon became impassable because they were no longer maintained. This was one of the reasons why most villagers welcomed logging and plantation companies to their area because it meant that road access would be extended and maintained. 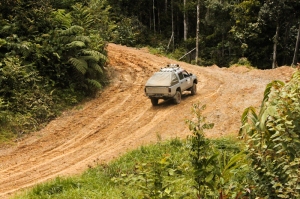 People’s attitudes towards logging were hard to understand for a foreigner like me raised on protest campaigns against logging and the ensuing damage to the environment and the local ecosystem. The idea that local Indigenous communities were in favour of logging and plantations in their neighbourhood was surprising at first, and then understandable, at least to a degree. So, I wrote the article about the roads partly in order to debate the issue with myself.

It would be easy to criticize the government for not supplying Sarawak’s rural interior with proper roads, after all the government has made millions of Ringgit by selling logging licenses to private companies. Deep-seated corruption has meant that much of this has gone into the pockets of individual families and never found its way back to the communities.

It is difficult and costly to build and maintain roads in this tropical climate with high rainfall and sandy soils to connect small communities with few inhabitants. Nevertheless, the lack of infrastructure extends beyond roads to telecommunications, electricity and piped water. Rural communities are often entirely self-sufficient. It seems to me that the government could do well to develop areas such as mini-hydro projects through which small communities could be supplied with electricity, instead of building mega-hydro dams in the region instead, which would displace many Indigenous communities.

Writing the article gave me the opportunities to engage with these complex topics, which are very important to me. Here are some photographs which I selected for the article but was unable to use at the time: 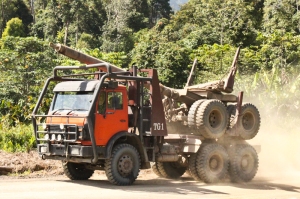 No Fear – Logging work, even driving trucks, is dangerous, and accidents are common.

Sarawak’s logging companies have expanded their operations, and workers like these two, whom I met in Long Siut, had worked in Africa for several months before returning to Malaysia. 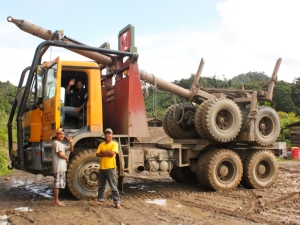 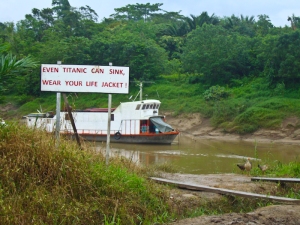 This photograph shows a trading post on a boat moored not far from Long Loyang where villagers can buy necessities such as cooking gas and sell produce like rubber and other cash crops.