Research is supported by an increasingly sophisticated array of visual methods. From interactive maps to infographics, there are many tools researchers, journalists, non-for-profits and other organisations can use to make their activities and the information they gather through qualitative and quantitative data collection visible. However, it is sometimes difficult for researchers who lack the financial resources or skillset to convert data into images. I think research is made much more understandable and easy to grasp if it is is combined with graphics, graphs and maps. That is the  main reason why I tried to create high-quality map material for my PhD thesis. My background in graphic design and experience with the necessary software really helped. What also helped was that some close friends had a full set of old but very precise maps based on aerial surveys taken in Sarawak during the British colonial period.

Map of Sarawak from the British colonial period

These maps allowed me to create precise and colourful maps of my research area and its surroundings. I also created some larger overview maps which located my research area within Southeast Asia. Here are two of them: 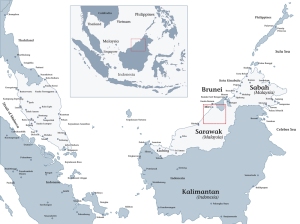 My research area in Southeast Asia

Map of my research area with small inset overview map

Creating these maps was a lot of effort, only made easier by my two small Wacom Bamboo graphics tablets – one for the office and one for home, since I had to work lots of evenings and weekends while I was tracing the maps. But the effort really paid off. Not only did the maps really help me plan and carry out my fieldwork trips, I also reused them in my publications, for instance the book in which many of the photographs I repatriated during my research were published. I also used versions of them for the exhibitions in which the photographs were publicly shown at the Sarawak Museum. 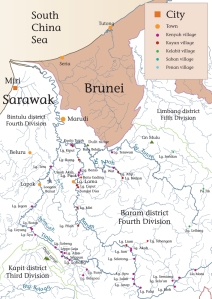 Closeup map of the villages where I worked during my research

The area where my work was located is so remote that there are only very few maps in existence, and most of them are not publicly available. During my trip I sometimes managed to get hold of some partial maps from government servants, for instance at the local district office, but they were usually partial and never covered the precise area I needed. Using old colonial maps had the drawback that many communities had relocated, but I was usually able to figure out if that had happened and where villages and longhouses had relocated to.

Here are also some additional maps I used in conference presentations in which I presented my work: 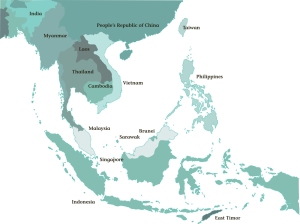 Map with a general overview of religious distribution in Southeast Asia