In 2010 research for my PhD brought me to Marudi for a great biannual event which has taken place there since 1899: The Baram Regatta. The event was first celebrated when Charles Hose, the government resident in Marudi (although it was then called Claudetown, after the first resident, Claude de Crespigny), held his peacemaking with representatives of the surrounding communities. The first regatta was held over three days and culminated in a great meeting among tribal elders.

The first Baram Regatta was attended by Alfred Cort Haddon, who visited Resident Hose on his way home from the Torres Strait. Haddon wrote about it later in his book “Head-hunters black, white, and brown” (1901). Hose had invited Haddon to Marudi because he was an avid amateur anthropologist, who later wrote about his many years in Marudi, and about the people he met during his work there in his two books “The Pagan Tribes of Borneo” (1912). The books speak of his great interest in the region, its people and environment, but also of his own sense of superiority as a white government servant. The books include many photographs he took during his time in and around Marudi, among them portraits, landscape shots, photographs of longhouses, and of his own activities. His photographs are exhibited in the Fort Hose which today belongs to the Sarawak Museum Department. The following is an excerpt from a panel exhibited at Fort Hose about the first Baram Regatta in 1899:

The Baram Regatta and Peace Conference
The main objective of the Baram Regatta was to substitute for old bloody-feuds and to persuade the tribes to aid the government in keeping the peace. To suppress fighting and head-hunting, the Resident of Baram, Charles Hose organised an annual race for the war-canoes of the villagers to be held in April 1899. All the longhouses in the Baram and Tinjar were informed. They included the Kenyahs of the Baram, the Lirongs of the Tinjar and Madangs of the central highlands as well as a number of Ibans.

Boat taking part in the regatta

On 6th April, 1899, about five thousand people from Baram and the Madang, was encamped between the Resident’s bungalow and Fort Hose. The Ibans took up quarters in the long row of Chinamen’s Shop in Marudi town. The Tinjar Lirongs arrived after sunset. They were dressed in full war attires in their war canoes and on arrival the Lirongs rushed up the hill to attack the Kenyahs in a mock battle. After the clash everyone settled down quietly for the night.

On daybreak of 7th April 1899, all the people assembled in a temporary conference hall built with palm leaves. The Baramchiefs sat on a platform on one side of the hall while the Tinjar men on the other. The Resident placed himself in the middle. The two parties exchanged messages and presents and the great boat race was announced to take place on 8th April 1899.

Everyone came dressed up in their cultural dress

At daybreak of the regatta twenty racing boats from all the longhouses were brought to a starting point four miles upriver from the Fort. Each boat carry between sixty to seventy men, sitting two abreast. At the sound of a gun, the twenty boats leaped through the water. Soon, two boats drew out in the front with a grand neck-to-neck race. The winner was a crew of peaceful downriver folks who learned boat making from the Malays of the coast. The crowds on the bank behaved in good humor, and forgot their feuds in the interest of racing. 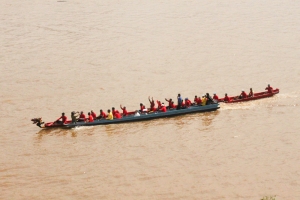 Rowers taking part in the regatta

The 2010 Regatta was a lively and colourful event. The Sultan of Brunei attended, and he and other VIPs were received by representatives from surrounding communities dressed in their traditional customary dress. All kinds of races were held in different categories, with crowds watching from the banks of the river. 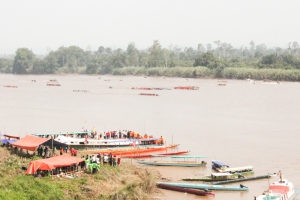 Boats preparing for the next race along the river bank

Many among the audience had come by boat in the days before the regatta, to do their shopping in Marudi before the start of the event 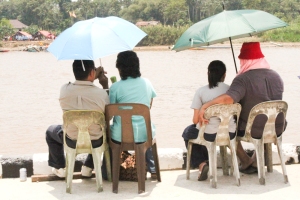 Audience watching the races from the embankment 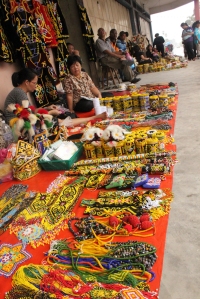 Kelabit lady looking at beads sold in a street stall